Tonight I finished off the last of the setup. Mainly a few missing cables, headphones and one last mic on the drums which I didn’t have with me a few days ago. 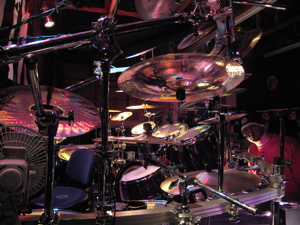 The drummer had a set of mics for his (ridiculously huge) kit. There were some nice mics there which I used, but some I didn’t. He had these little Sennheisers on the toms and I don’t really like the sound of them. They’re kind of boxy sounding. So I switched those out for my EV 408’s and 468’s which I really like for toms. I also used a couple of my mics on the snare. His snare was very poppy and not to “snarey” so I mic’d it from the bottom as well with an SM57 to get more…

This dude’s kit is so giant that I had a hard time getting mic coverage on the damn cymbals. He’s got five chinas on the kit and a zillion others, including two sets of hats. I think perhaps his lack of confidence in his playing is being mentally balanced out by his equipment.

The guitar player is a pretty cool guy. He’s got FOUR Marshall cabinets with FOUR 12″ speakers in each. That’s a big enough rig for even the biggest of venues. We’re micing the whole frigging rig to get his “wall o’ guitar” sound. I must admit, it is pretty damn powerful despite how insane it is to have a rig that big. 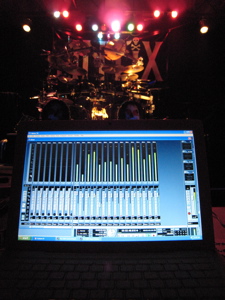 Not the most user friendly rig

The new system I’m using is a pain in the ass. The Tascam firewire 1804 unit has direct monitoring so there’s no delay in the audio. The accompanying software mixer is really lame. It only has volumes and pans. The other stupid thing is the knobs don’t really seem to work in the mixer unless you move them all the way past some arbitrary point. Then it seems to “kick in” and they work. Not really sure what that’s all about. It’s also lame because if I want to EQ or add effects while they are playing I can’t. The output of the mixer is also somewhat gutless so I can’t really crank that part up or it distorts easily.

I had some signal routing problems at first which I figured out. There are so many ways you can route the signals into cubase and then I renamed the inputs which screwed me up. I then ran into difficulty trying to tell cubase where to store the new audio files for a new track. My buddy who is a cubase expert told me how to do it, by setting up a template. I needed to get the tracks recording to an external hard drive rather than the internal on my macbook. Once I got that figured out we were ready to track.

This band rehearses through a PA with over 20,000 watts and a zillion speakers. They’re used to rumbling the earth when they play. It was tough to talk the drummer down off the ledge since he didn’t think his kick drums were being recorded. It was basically since he couldn’t feel them and I tried my best to explain to him that a 1/2″ headphone speaker couldn’t compete with 20,000 watts of PA and 300 square feet of speaker surface…

We managed to get one tune’s drums, guitar and dummy bass down before calling it an evening. We couldn’t keep the bass because his tune was all over the place. It’s cold as hell here and their practice space temps were all over the map.