Here’s a little salute to the asshole who broke into my bass player’s suv:

After a gig we hauled our gear into our respective vehicles and the bass player had the PA system in his suv. He had a bunch of stuff in his garage so he had to park outside overnight. When he went out to his truck in the morning he found a broken rear window and one of our JBL 18″ subs was missing. That part sucks.

Now for the “justice” part of the story:

At this particular gig we had some kind of problem with the PA. There was a bad cable or something which caused us to blow one of our 18″ JBL subs.

So the asshole crook has a 50/50 chance of getting a good 18″ sub for the pawn shop so he can go buy some crack. Well buddy, no crack for you. You stole the blown one you loser…

Ordered 1200 Ritek CD-Rs from these guys. The order was placed on the 7th. I just got the discs today, 13 days later. Ok, that’s bad but that isn’t why I’m posting this.

Just look at these pictures:

Look at the dirt, dust & scratches on the discs above.

The obove disc has a freaking TIRE TRACK on it.

Scratches, pieces of plastic stuck to the discs above, and even chunks out of the plastic. 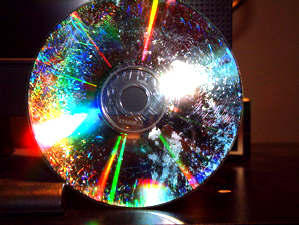 This disc above is great, isn’t it? I’m sure a client will be happy when I burn his project on this eh?

I’m on the “stories of bands I’ve done shows with” flow right now. So today’s victim is the Smithereens.

First off I must say I like the Smithereens music. It is just plain good rock and roll. I don’t want to ruin their secret, but you know all those Marshall guitar amps you see on the stage? They’re all empty. If you know anything about Marshalls you know they are loud as hell. One Marshall can cover a large stage/venue. The Smithereens have tons of Marshalls on the stage and the audience goes “wow look at all those marshalls.” But the cabinets are hollow with no speakers in them. It is all for show those damn cheaters. They are not the only ones that do this either…

My band has done several shows with the Smithereens. I’m guessing about 5. One time we did a show with them in Park City. Apparently the venue didn’t provide them with an “ample” PA system. While I was listening to their show I noticed a terrible distortion and crackling out of the mains. I went up to the soundman and asked him if he could hear the distortion. He said sure and explained that since the PA wasn’t as big as they wanted it, he was going to simply push it way beyond the limits and “blow the fucker.” Well ok then.

The next time we played with them was at a convention hall in Salt Lake. The shows went well. My band had to book out of the gig because we were playing another show at a club about 1 block away. When the Smithereens finished their gig they came over to our gig and the rest of the night was a fun jam fest.

After the gig at the club we all went to my bass player’s house to continue the party. We were all having a good time but the Smithereen dudes needed to have even more of a good time. They started asking everyone there if they had any “blow.” Apparently someone there actually did. (After all, all musicians are on drugs). The party continues until the Smithee’s ran out of their blow. Then they start asking everyone there to call their friends or drug dealers to get them more blow. This happened SEVERAL times.

After doing that much blow, our Smithereen buddies started to get obnoxious. They were starting to really bug the hell out of everyone there and scared most the people away (including me). My bass player told me that the Smithee’s were the last ones to leave, when he “kicked their miserable asses out of his house” at 5:30am.

Here are just a FEW of my 20+ years owning and running a studio.

#2
Band’s own “producer” shows up. He says “That last mix you did was ok, but we need more cross imagery on the guitars.”
I ask “what magazine did you read that from? Circus?”
I then tweak some auxes on the console that are inactive. He says “better, give me more….no too far…there just right”
Me: Tell me about your credentials. How did you get to be a record producer?”
Producer: “mumble mumble”
Me: What?
Producer: I work at blockbuster music
Me: What do you do for blockbuster music?
Producer: Cashier

#7 Band on a budget
Drummer keeps fucking up. Band gets pissed. Tells the drummer to get it right this time or he’s out of the band. The drummer under this kind of pressure of course fucks up. Band fires him. Bye bye.

#11 Guy brings in his home studio trax for me to mix…
Client: Why don’t my vocals sound any good?
Me: Sounds like you’re using a 58 on them!
Client: What’s wrong with that?