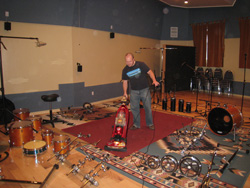 Tonight I just completed the setup for the big double album technical rock band 1.5 month project. Now I know it is likely that some of these band members I’m working with will be reading my journals here, so be warned not to take any of it too deeply. It’s all in fun… maybe.

The setup went fairly well with a few problems due to the drummer.

First the drummer was late because his dog was “pissing diarrhea blood out it’s ass” and his wife was puking because she was pregnant and couldn’t smell it. Man I couldn’t imagine the hell that guy is going through (not with the dog, with having a pregnant wife).

I haven’t worked in this studio for a few months. It was an experience for me trying to remember how the studio’s patching from room to room was setup, along with remembering the basic functions of the Euphonix console. The main owner/engineer was there to help, which was very good.

One of the tasks before we can record was to figure out how to get all the keyboard tracks into ProTools (or ProDrools as I prefer to call it). The keyboard player, bless his heart, doesn’t know much about what he’s doing. He didn’t even know what or if he had an audio interface with his Apple Logic Express system. He didn’t.

When importing the midi files, the individual takes or chunks were all broken up into separate tracks by ProDrools. I figured that I had to use a merge function in logic to merge each track individually first, before importing into PT. I’m not sure if Cubase is the same, but maybe that’s an entry #3 for my section called “why protools sucks.”

The setup took almost 6 hours, protools issues and drummers included. Tomorrow we start at high noon with the tracking of drums and bass. Noon is pretty late for me. The guys in the band have been complaining a bit about the schedule and not having enough days booked in May/June, yet they want to start at noon. If we started at 9am each day instead of noon, we’d gain one of those precious days back every three…