Tonights gig was at a new club for me. The other two guys in the band had played there before when I had a sub though.

The club was a pretty cool place and it was packed. I was happy to see an awesome crowd. One of the worst things to have to do as a musician is play in front of no crowd. Our poor bass player has been suffering from pneumonia and he did a great job.

An old pal of mine Jason dropped in to the show tonight from Scottsdale, AZ. Jason is the marketing manager for Fender Audio. Jason is also a crazy guy who had a really cool punk surf band a while back. I let him know about the happenings with this blog and the forum section and he said he would try to link from Fender’s site and he’d post some news in the forums! He also jumped up on stage and sang a song with us tonight (see pic). 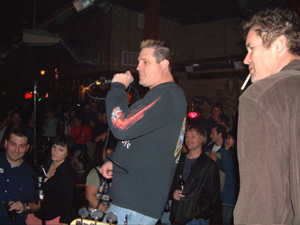 There is a stereotype of rock & roll musicians that we always get hot chicks. That’s nice but sometimes there are some “other” types of chicks that are into the band as well. Tonight was a prime example.

There was this obnoxious chick who was drunk as hell. She had the hots for our bass player and stood in front of him almost all night. Finally her mullet ridden boyfriend came up and grabbed her and dragged her away from the stage. I managed (while still playing the drums) to snap this pic (below) right when he grabbed her around her head. They both bit the dust by the side of the stage and couldn’t get up for quite some time…