I swear not a day went by in my old studio life that I didn’t get a call like this. 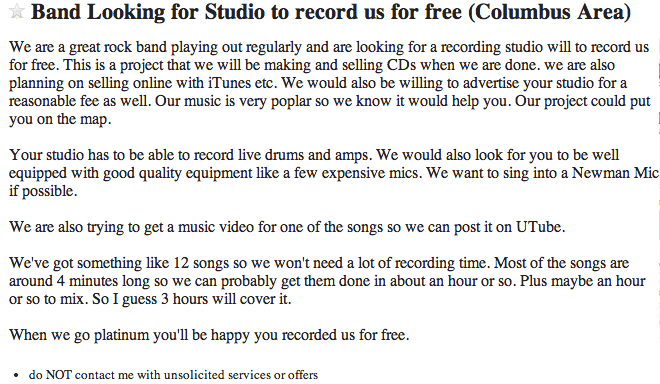 The bands would always tell me they had x number of buyers ready to buy their CD and when they got paid for them, they would pay the studio time. My patented answer was always, “pre sell and collect the money first…”

Greetings.  Yes, it has been a while.  I’ve been so involved in my other business ventures in the golf and web development worlds that my audio and gigging has reduced to a very small part of what I do.  Unfortunate in some ways, but good in others.  I do need to play more drums and I’d love to get a new gig, as long as I don’t have to rehearse every Tuesday and Thursday night with a bunch of drunks and stoners.

I’m posting today because tomorrow I’m stepping back into the twilight zone of music.  Back into Spinal Tap.  Here are the details as I know them at this point and I’m sure the story will get more entertaining as I do the gig.

I’ve been asked to help a very nice cat, a guitar player, mix his album.  I’ll not be mixing on my gear.  Oh no.  I’m going to mix at his place on his PARIS system.  He’s got an old Macintosh G3 running Paris.  Paris, for those who don’t know, is one of the oldest DAWs (digital audio workstations) out there.  The system was very nice in the day, somewhere back in the early 2000’s.  I made some great sounding music on that system.  These days I use Cubase 6.x which has far more capabilities than that old system by Ensoniq.

I heard that the drum tracks are three channels: kick, snare, overhead (mono).  Um.  Shit.  That’s not good. The whole setup is max 16 tracks.  I fear that the original tracking quality will suck.  I fear some Radio Shack microphones and the rest. Half this session will probably be me trying to help this poor guy learn how to record music, setup mics and all that kind of thing.

I received a preview CD of the tracks, mixed and not processed, EQ’d, or anything.  The tunes are 80’s rock with some wailing guitars.  It is a guitarist’s project.  The vocals leave a lot to be desired and are very rough, pitch wise, performance wise and especially dynamically.

This guy is a nice guy and thinks highly of my engineering skills.  I’m sure I’ll be able to make his stuff sound much better than the original tracks, but I’m not going to be able to make it sound like Pink Floyd or anything like that.

Thanks to SmartSchoolFinder.com for listing this blog as one of the top audio engineering blogs.  Follow this link for the full list.

I’ve not just gotten a THIRD email from a third local studio going out of business. They’re all emailing their gear lists and liquidating.

If you need cheap gear now is the time. Lots o’ gear out there on ebay right now from lots of desperate former studio owners trying to get some quick cash.

Got an email from a client today.

“Hey we recorded in your studio back in 1991.  Do you still have our master tapes?”

Wow.  And I can’t even find my car keys.